Why do Grulla use the Holland & Holland action?

Now if I were a journalist I’d be scared to say a bad word about either Holland & Holland or Purdey with the fear of commissions drying up. Both of these makers have a marketing budget that commands respect from the press. Thankfully I’m not, so can speak openly and honestly about the pro’s and cons of both these two classic hammerless actions. Afterall they are the two side by side sidelock actions that most buyers compare when looking for a top-class handmade sidelock shotgun. So which is the better action and why do AYA, Grulla and a number of others tend to copy the Holland & Holland action instead of the equally beautiful Purdey action?

One could argue that the now defunct Birmingham made Webley & Scott sidelock action should also be considered for this comparison but as no one does copy that action now, despite very serviceable examples by such makers as W&S, Hellis, Osbourne, Jeffrey, Army & Navy amongst a plethora of others. I will leave that for another day.

Both the Holland & Holland action and the Purdey share a number of similarities;

Both are bar-action sidelock ejectors. Both are still in production today. Both actions can be traced back to the late 1900s; the Purdey to Beesley’s patent of 1880 and the Holland to its patent of 1893. Both are well shaped and graceful in appearance. Chopper-lump barrels are standard and the fit and finish of the metal parts are top class. The operating mechanisms generally have top-levers. The top-lever is mated with a Scott spindle and the common Purdey double under-bolt. Either type may have a concealed third bite, but most will not. Fore-end fastening on both models will be by Anson pushrod. Disc set strikers are also common to both.

So where do these actions differ;

For all the similarities, the two guns operate on totally different systems. The Purdey is a self-opener with both the locks and opening mechanism powered by the mainspring. Many a gunsmith has referred to a Purdey as easy opening but hard closing. This is why you will generally find more Purdeys with cracked stocks through the hand than most other side by sides. The Holland also has a self-opening system, but this is powered by a separate unit with coil springs, fitted under the fore-end iron. The mainspring in the Holland & Holland only fires the locks. Because the Holland has a separate coil spring mechanism, it can be adjusted and replaced with comparative ease. Also as it is separate mechanism that works independently it can and is fitted to boxlock side by sides making it the more versatile option in my opinion.

Holland & Holland uses the ubiquitous ‘Southgate’ type ejector and it is used widely because of its robustness and ease of adjustment. Purdey ejectors are a little more complex and are particular to the model. They have also gone through more modification over the years.

Some Holland & Holland guns such as the Royal have optional detachable locks. Purdeys do not. The Holland lock can be detached by means of a lever on the lock pin, which can be screwed out.

Handling characteristics are that Purdeys tend to be balanced slightly forward of the hinge pin, while Hollands balance on the pin. Obviously this can be altered on either gun. The Purdey action in an otherwise equal weight gun feels slightly heavier, placing weight between the hands and giving the gun a real solidity and manoeuvrability which is very confidence-inspiring. The Holland is delightfully balanced and perfectly proportioned, with no real idiosyncrasies.

Small stylistic differences exist in the shapes; the Holland & Holland has a diamond shaped hand, while the Purdey is rounded. The Purdey version of the splinter fore-end is slightly deeper than the Holland. Both models will be encountered with bespoke engraving, but the typical H&H style is a deeper relief of acanthus scrolls. The Purdey house style is tiny bouquets of roses with ultra-fine scroll. The Holland perhaps looks more ‘modern’ in this respect. It is certainly more obvious.

Both guns have the ‘stocked to the fences’ modern look, which has come to be known as the ‘London pattern’ and copied by everyone since 1900. Many 2nd tier London ‘Makers’ utilised the W&S action and filed to obtain the same shape (I said I wasn’t going to mention W&S action but I can’t help myself). With minor modifications, the modern Purdey is essentially the same Beesley action gun they were making in the 1890s and the Holland & Holland is the ‘Royal’ model with 1922 self-opening system, also basically unchanged. 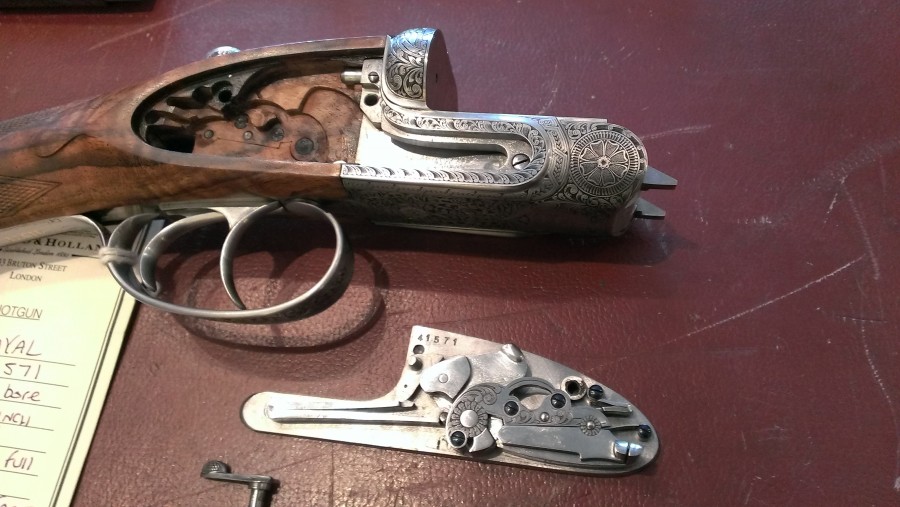 So, which is better?

The qualities of the Holland are more simplistic. Everything works, there is nothing complicated and the action is beautiful when executed correctly. The Assisted opening mechanism is easier to close than the Purdey.

The Purdey is a mechanism from the mind of a genius or madman depending on your viewpoint. Many Gunmakers will tell you they generally rate the Holland as better because it is simple and utterly reliable, easy to work on and much copied. To a functional engineering mind, it all makes perfect sense. To someone repairing or making a gun, it is infinitely preferable.

The Purdey has to be made beautifully to work and be reliable. The materials have to be top quality if it is going to last and the fact that very few other Gunmakers have successfully copied it. Some would argue it shows that it is difficult to copy and is beyond most. I tend to disagree with this theory and it is purely economics, after all most end customers want something that looks nice, works as it should and lasts so why would any Gunmaker make life difficult for themselves? Especially when the only company to command the price for such a complicated intricate action is Purdey themselves.

So, as you may have guessed I’d always go for the Holland & Holland action out of the two.

The Grulla shotguns (as are AYA) are handmade to order on either the 5 pin or 7 pin Holland & Holland patented action. Not all come as standard with assisted opener but it is standard on all models from Consort and above and optional below. Given that the cost of a new Grulla made to measure with choice of stock blanks costs 10-20% of the equivalent Holland & Holland or Purdey. You can view the entire range by clicking this link.

Meet the Grulla Team Do you know your Chopper lump from your Dovetail barrels? Grulla demo guns now in stock The beauty of being handmade Grulla Pairing Stock shapes – Do you know a round knob from a Prince of Wales Traditional Gunmaking and Gunfit The Fieldsports guide to game guns is out Endorsed by the Duke of Northumberland Over & Under or Side by Side