Endorsed by the Duke of Northumberland

Ralph Percy, 12th Duke of Northumberland, pictured in the gunroom at Burncastle with a selection of the family’s Grulla shotguns. 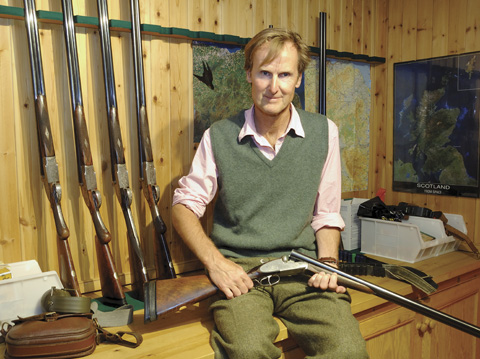 The Duke of Northumberland’s shooting year often starts on August 12 with a couple of days’ grouse shooting in north Yorkshire before moving to Burncastle, the 8,000 acre estate in the Scottish Borders where his family spend much of the summer.

After the severe winter of 2009-10 took its toll on grouse numbers, little shooting took place there last year, but the previous year it produced 1,400 brace, with days of 100-150 brace between nine guns.

“For some years we have let much of the shooting at Alnwick, with the smaller 50-100 bird days outside the park being managed by a sporting agency and largely taken by repeat bookings,” he explained.

“My wife and I host four let double days each year. The focus is on entertaining individuals who really appreciate excellent shooting in beautiful surroundings and making them feel like our personal guests, so they stay with us in the castle and hopefully enjoy our hospitality. Once they have sampled it most become regular visitors!”

Having shot his first pheasant in 1966 at the age of 10 and his first grouse the following year, the Duke of Northumberland quickly progressed from using a .410 Robertson to the 20 bore Webley & Scott his father Hugh had shot as a child.

At the age of 15, he adopted one of the family’s other guns, a 12 bore Holland & Holland Paradox, then three years later inherited a pair of Purdey 12 bores made in 1922.

After a few years of service, however, these heirlooms were showing signs of age and becoming increasingly unreliable.

Disillusioned by the high cost of repairs, he decided that he needed a pair of guns that were more durable and better suited to modern cartridges.

It was while shooting in Spain with a friend that he first encountered Grulla shotguns.

On a subsequent visit he met Jose Luis Usobiaga, managing director of Grulla Armas, and ordered a pair of Grulla shotguns. The Duke went for the Grulla Churchill shotgun model with some bespoke engraving built on the Holland & Holland 7 pin sidelock action.

At that time Grulla had no representation in the UK, so the order was fulfilled directly from the factory.

And he simply took the measurements from his existing Purdeys and specified the configuration he required.

Having used them very successfully against a range of quarry over a number of years, the Duke of Northumberland passed the initial pair of Grulla shotguns on to his eldest son George, and ordered another pair better suited to shooting high pheasants.

Whilst acknowledging that over-under shotguns are rapidly gaining popularity within game shooting circles, the Duke of Northumberland prefers the more traditional side-by-side barrel alignment and feels no compulsion to change.

Having admired his Grulla shotguns, a number of his friends have placed orders of their own.

The engraving on the pair of Grulla Royal shotguns the Duke of Northumberland had made as a 25th wedding anniversary present for his wife feature the skull and crossbones motif. 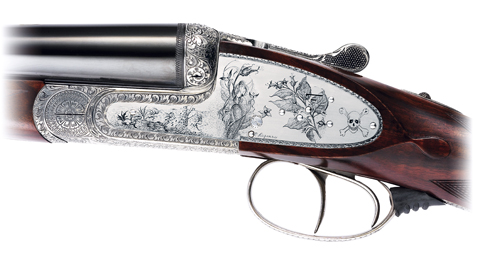 This patronage of Grulla continued with the purchase of a pair of 12 bores for his wife Jane, Duchess of Northumberland, who took up the sport early in their marriage to spend more time with her husband.

The guns were a 25th wedding anniversary present for the Duchess, who had just finished her first book The Poison Diaries.

To reflect its title the Duke of Northumberland had Grulla’s master engravers incorporate into the engraving various illustrations from the book, as well as the skull and crossbones that feature on the gates guarding the entrance to The Poison Garden, which forms part of The Alnwick Garden.

In 2008 he purchased a further trio of second-hand Grulla shotguns as an 18th birthday present for his youngest son, Max.

“I regard guns as a working tool,” he said, “Although I fully appreciate the artistic value and craftsmanship which goes into a best English shotgun, their financial value can make them something of a liability for frequent use in the field, particularly in British weather. Grulla shotguns offer excellent value for money without having to worry quite so much about damaging a family heirloom.”

You can view the full Grulla shotgun range by clicking this link. All handmade to your measurements with a free gun fitting and choice of stock blanks.

Meet the Grulla Team Do you know your Chopper lump from your Dovetail barrels? Grulla demo guns now in stock The beauty of being handmade Grulla Pairing Stock shapes – Do you know a round knob from a Prince of Wales Traditional Gunmaking and Gunfit The Fieldsports guide to game guns is out Why do Grulla use the Holland & Holland action? Over & Under or Side by Side