Over & Under or Side by Side

We at W Horton & Sons specialise in bespoke made to measure guns at a variety of price points. In the course of doing this we talk at great lengths with a clients to ensure they purchase what is right for them. One theme is constant in this process when the topic of side by side is raised, there is a misconception that a side by side is in someway inferior to an over & under in regard to how they perform in the field (Swing, velocity, felt recoil, sight picture, pointability and limit on choice of cartridge). Utter codswallop!

Of course people have a preference in regard to the format of the chosen gun but more often than not, most people love the idea of shooting with a side by side but believe they just can’t get on with them. This belief often comes from the few times they have borrowed an old rickety side by side with a 14″ LOP that just didn’t fit. It is no wonder they have had a bad experience. In regard to gun fit there is no room for error in a side by side where as an over & under is more forgiving. When you get your gun fit just right on a side by side the experience of shooting a side by side in our opinion is unrivalled. 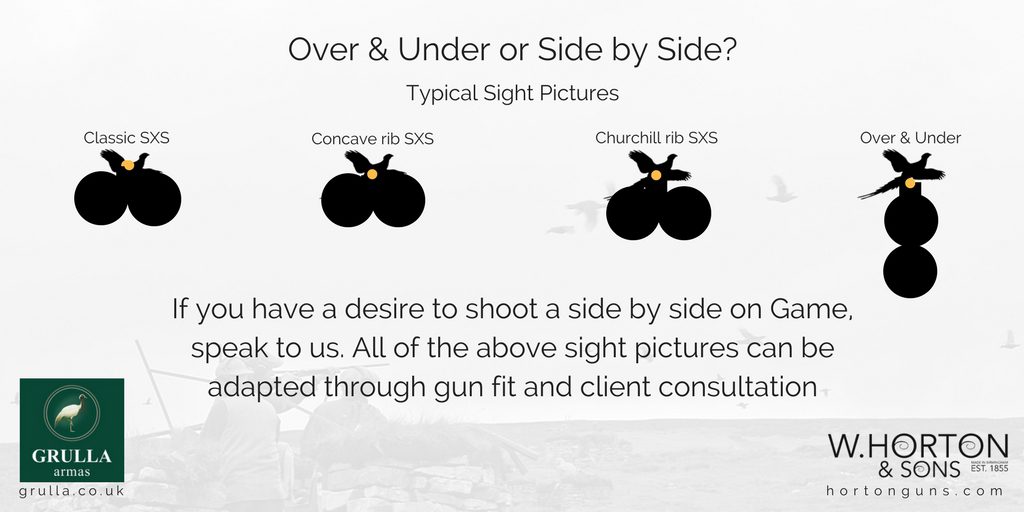 The first thing to point out is that you are shooting with the gun, not playing golf! That said the balance and length of barrel chosen in a side by side will assist the swing. If you want a side by side with 32″ barrels then that is an option from Grulla and a few other makers we retail. Typically a side by side with 28″, 29″ or 30″ barrels gives the right amount of assistance to maintain swing. Regardless of barrel length and as with any sport, practice makes perfect. If you can’t get on the bird with the right lead, it is the person behind the gun that has the problem and not the gun.

Another myth. You need long barrels to increase velocity to effectively kill high birds. The fact is the muzzle velocity performance from a smooth bore gun is at it’s optimum at around 26″, this has been tested and proven time and time again. In fact the difference in muzzle velocity from 24″ to 32″ is virtually the same with only marginal difference. A longer barrel will reduce noise levels but that is the only material difference.

A side by side is normally set up to shoot much flatter (you can’t see much or any rib, just the bead) than an over & under which generally shoots a little higher (you see more of the rib sloping upwards away from you). This means that on a classic set-up of a side by side you have to sometimes cover the target before you pull the trigger, this can feel quite alien so there is a tendency to lift the head off the stock meaning you stop the gun and miss underneath etc.

However the sight picture can be altered to suit the client by correct gun fit, through consultation process we will ensure the sight picture is what you want to see and are used too. Then there is the single sight plain debate that you get with an over & under which is why most people prefer an over & under vs a side by side. You shouldn’t consciously be looking at the gun when shooting is the first point. There are also a variety of rib styles to choose from in a side by side that can give a similar experience of a single sight plain such as the Churchill rib (not fashionable at the moment) where the rib is raised slightly above the barrels.

In regard to pointability, an over & under is more natural to point than a side by side without a doubt. The more you shoot with any gun, your brain will subconsciously take sight picture snap shots until eventually the amount of lead given on a target becomes instinctive and second nature.

A side by side has specific advantages vs an over & under when it comes to shooting driven grouse or partridges at hedge height.

An old game keeper once said to me; if you were meant to shoot barrels that are positioned vertically, your eyes would be in the same position.

Limit on choice of cartridges

Tripe! The barrel construction and chamber length in any side by side built today is identical to that of an over & under. For example Grulla buy barrel tubes in from Italy and they are the same barrels used in many over & unders that you may well own now. They feature chrome lining and longer forcing cones to reduce recoil and aid patterning. So anything you put in your over & under will work in any modern side by side. Due to the lightweight nature of a side by side we’d recommend a softer load in a side by side. This doesn’t necessarily mean you put lighter loads in terms of grams but a load that is more forgiving in terms of punchiness. You tend to find the more brass on a cartridge, the more kick they will give. Like any gun, you will find a cartridge that suits it.

You can shoot with a side by side. It requires practice and patience to master it. You are not under gunned if you opt for a side by side. You will need it fitting to you. Do not buy a £100 knacker at auction to ‘have a go’, it will not fit, it will likely break and you will give up.

Tags: over & under, side by side

Meet the Grulla Team Do you know your Chopper lump from your Dovetail barrels? Grulla demo guns now in stock The beauty of being handmade Grulla Pairing Stock shapes – Do you know a round knob from a Prince of Wales Traditional Gunmaking and Gunfit The Fieldsports guide to game guns is out Why do Grulla use the Holland & Holland action? Endorsed by the Duke of Northumberland